I hope everyone knows what is an illusion.  An illusion is a kind of distortion of the senses, which reveals how the brain normally organizes and interprets sensory stimulation.   An optical illusion is always characterized by visually perceived images that are deceptive or misleading.  Here are some optical illusions which you may like.  See them and enjoy..

This is another interesting illusion where you can see the dancer move both clock wise and anti clockwise.  This illusion is erroneously used as brain test to determine whether right or left hemisphere is dominant.

If you either close the left or right image, and observe the other two images, you can see both of them rotating in same direction.

This is one of the fantastic illusions which is called as Pac Man Illusion.  In the Pac Man Optical Illusion, if you follow the rotating pink dot with your eyes, the dots will remain in only one color, pink.      But if you stare at the black  '+'  sign in the center, the moving dot will appear to be green in color.

Please concentrate on the black '+' sign in the center, and you will see that the moving dot will appear to be green in color.   Keep on staring on the sign and after a short period, all the pink dots will slowly disappear and you will see only one green dot moving in the circle.

This illusion is also known as Adelson's checker shadow illusion which shows something difficult to believe.  The square marked  B looks lighter than square marked A.  This is due to the shadow being cast on it.  But actually the color on both squares A and B  is exactly the same shade of grey.  If you cannot believe it, you can cut / print the squares to verify that both are exactly the same shade.  Look at the picture below. 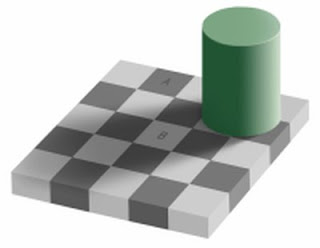 If you can not believe that squares A  and  B are of same shade,  please see the video below which proves it.

Here are some of the funniest and amazing facts about food.  Read them and enjoy.