Do you know that once upon a time there lived giant humans on Earth who were man eaters?  These giant humans were more than 12 feel tall.  Here is a story of the Red Haired Giant Humans who lived thousands of years ago on this Earth.  I have read about these red haired giant humans in one of the websites and reproducing the details her.


Thousands of years ago, giant humans roamed the west.  Those giants terrorized the early native settlers in North America.

The native tribal people still speak of those ancient days when their ancestors fought against the man eating red haired giants who were 12 feel or more taller who roamed the land attacking the settlements and brutally carrying off screaming women and children and eating children for food.


The Paiutes,  a native American tribe indigenous to parts of Nevada, Utah and Arizona,  told about their ancestors' battles with the ferocious race of white, red-haired giants.  According to Paiutes, the giants were already living in the area.

The Paiutes named these giants as 'Si-Te-Cah' which literally means "tule eaters".  The tule is a fibrous water plant which the giants wove into rafts to escape the Paiutes continuous attacks.  They used the rafts to navigate across the Lake Lahontan.

As per the Paiutes, the red haired giants stood more than 12 feel tall who killed and ate captured Paiutes as food.

One day as the Paiutes and other tribes were chasing the remaining red-haired giants, the fleeing enemies took refuge in a cave ( near Neveda).   The Paiutes and other tribal warriors demanded the red haired giants to come out of the caves to fight,  but they never came out of the caves due to fear because they were small in number and the tribal people were large in number.

Later on an earth quake rocked the region and the Nevada cave entrance collapsed.


How the giant man eaters were discovered?

Hundreds of years later archeologists explored the caves near Lovelock, Nevada and found the mummified remains of the red haired giants.

Evidence of the giant humans who were 8 to 12 feet tall still exists in fossil records, tools and other artifacts recovered from archaeological digs. Giant skeletal remains have frightened researchers.


According to the San Diego Union,  August 5, 1947, the mummified remains of giants were discovered buried near the Arizona-Nevada-California wasteland. The giants' remains were still clothed in strange leather garments. The team of explorers tentatively dated the remains as nearly 80,000 years old.  Here is a photo graph of the Nevada cave where red haired giant humans' skulls and mummies were found.    You can also see a photo graph of the giant red haired mummy discovered at Nevada caves. 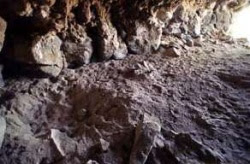 As the excavation of the Nevada caves progressed, the archaeologists came to a conclusion that the Paiutes myth was not a myth but it was true.  They discovered lot of broken arrows that had been shot into the cave to kill giants and a dark layer of burned material.

One of the important artifacts which was recovered from these caves of red giants is what some scientists are convinced is a calendar -  a dough nut shaped stone with exactly 365 notches carved  along its outside rim and 52 corresponding notches along the inside.  This was not the final chapter of red haired giants in Nevada.

Again in February and June of 1931, two very large skeletons were found in Humboldt dry lake near Lovelock, Nevada.  One of these skeletons measured 8.5 feet tall and was later described as having been wrapped in a gum covered fabric similar to Egyptian mummies.  The second skeleton was more than 10 feet long.

There is nothing more known about these red haired giants of North America but there is one more interesting fact about the giant humans.

There is a news that the giant humans were discovered in China too..    About twenty years ago in Northern China a University's archeological dig stumbled upon the burial grounds of 22 strange gigantic men.  Each giant seems to be almost 12 feet long and each was garbed in strange leather armor;  long strands of hair was hung along their skulls ..  red hair.  Here is a photograph of a 9-foot red haired female mummy discovered in China!

Who were these mysterious people that roamed America long before the Woolly Mammoths became extinct? Were they our ancestors or another race of humans like the Neanderthals? Some researchers notice strong similarities with large brained Cro-magnon man.

Have you heard of a talking dog?  Yes there is a dog whose name is Mishka which can talk like humans.  It is really true that a dog can talk.  Mishka is now 12 years old.  Mishka started talking since her childhood.  Mathew Gardea is growing this pet dog Mishka.  Mathew still remembers the Mishka's first words "I Love You!".


Mishka is a siberian dog.  During the last 10 years, Mishka has learned a lot of words and can utter words like humans.  There are lot of videos uploaded by Mathew Gardea on YouTube about Mishka talking words.  The videos has generated more than 20 million hits in YouTube.


Lot of videos are uploaded in YouTube about Mishka.  Watch some of the videos of Mishka below.

Mishka saying  "I Love You"


If you want to see more Videos of Mishka,  please watch Mishka's YouTube channel.
Posted by Raghav at 3:58 PM 0 comments

What is Transit of Venus? 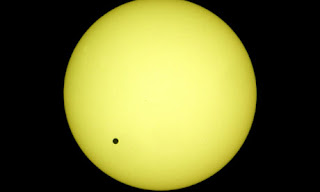 The Transit of Venus is one of the rarest astronomical event which happens when the planet Venus passes between Sun and Earth and appears as a black spot on the face of the Sun.

Many people in India are planning to watch the Transit of Venus but you should take extra precautions ( like in a solar eclipse). In the USA and Canada, the Transit of Venus will begin when the dark disk of Venus first touches the outer edge of the Sun, which is called as Contact I. The Contact I will occur at around 6:03 PM EDT ( 2203 GMT) from eastern US and eastern Canada.

The safest way to watch the Transit of Venus is to view it through a pin hole camera. A Pin hole camera is used to form an image of the sun on a screen that is placed about 3 feet behind the small opening. You can also use Binoculars or small telescope to project the magnified image of the sun onto a white card. Please do not look at the sun directly by Binoculars or a telescope.

Here is an image which shows the exact date of visibility of Transit of Venus at various places on Earth. 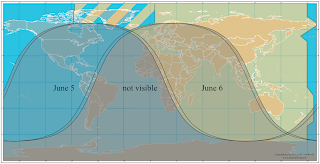 I was reading some magazine and read an article about a baby born without blood in her body. I want to share the information for all. Olivia Norton is a baby born with a very very low hemoglobin count. The fluid pumping through her veins can not be considered as blood. The normal hemoglobin level is 18 but Olivia's level was only 3. The baby was born to parents at Broomfield Hospital in Essex. Olivia was born as six weeks premature baby during the month of September, 2011 and she stopped moving in her mother's womb. Her weight was 5 lbs at the time or birth. The mother of Olivia noticed that there were no movements in the baby. She went to meet the doctors and they said it is an emergency case. The doctors said a baby born without blood cannot survive for more than 2 days. But Olivia was given series of blood transfusions and she was alive. After giving lot of blood transfusions, the baby came out of danger and is safe now.
Posted by Raghav at 10:19 PM 0 comments